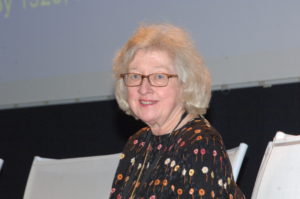 It is with great emotion and deep sadness that we learned of the passing of Dr. Mary Jeanne Kreek on Saturday, March 27, 2021 in New York.

Many well-deserved and heartfelt tributes have already been received from the international scientific community, to which we would like to add those of the ATHS community of which Mary Jeanne formed part on so many occasions in Biarritz.

She wanted it to be known from the very first THS meetings in St. Tropez, and afterwards in South East France, that she was a staunch devotee of this congress. Back in 1995, accompanied by her New York colleagues, Dr. Vincent Dole and Dr. Robert Newman, and alongside her friend Dr. Charles O’Brien of Philadelphia, one of the founding pillars of the ATHS congress whose actions made it possible for these seminars to continue and thrive in Biarritz, Mary Jeanne contributed enormously to the scientific quality and success of these meetings.

Since 2009, at which time the congress chose Biarritz as its home and became ATHS, Mary Jeanne has always been a regular and loyal participant. A brilliant and committed speaker, popular and esteemed by the audience she addressed, she knew how to captivate her listeners, even when dealing with difficult and complex subject matter.

As a disciplined scientist and meticulous researcher, who was also highly committed to her clinical work, Mary Jeanne championed with verve and insistence the duty of science and scientists to enlighten public policy in such a field as drugs where too often ideological and moral prejudices predominate and drug users are stigmatized.

Lastly, over the course of her visits to Biarritz with her husband, Bob, Mary Jeanne developed a genuine attachment for the Basque Region, its traditions, its way of life, its festivals and celebrations … where she and Bob so enjoyed meeting up with their friends among whom we were honored to be counted.

In bidding our final farewell to Mary Jeanne, we wish to express our profound gratitude, admiration, friendship and above all affection.

In the name of ATHS, its organizers, speakers and participants, we would like to express our deep-felt and sincerest condolences to her family, especially to Esperance, Robert Jr. and their children, of whom she spoke so often and so fondly.